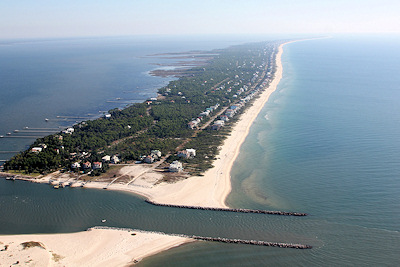 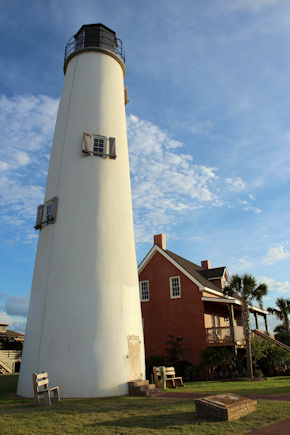 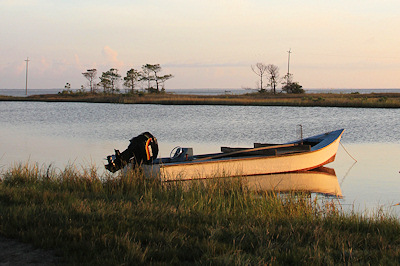 St. George Island, Florida, a Florida beach without crowds, located approximately 75 miles west of Tallahassee, and approximately 80 miles east of Northwest Florida Beaches International Airport in Panama City, is easily reached by bridge from Eastpoint on US 98, the scenic route along the Panhandle coast.

The island, 28 miles long and no wider than a mile at any point, is bordered on the south side by the clear warm waters of the Gulf of Mexico. Apalachicola Bay, one of the most productive commercial and sport fisheries in Florida, with the oyster industry being the most well-known, borders the north side.

A rare sea island, St. George Island has a history as vividly colorful as its unspoiled native flora. It was first inhabited by the Creek Indians between the 10th and 15th centuries. The arrival of European colonists to the area in the late 1700s was followed by an intense struggle for control. In 1803, the Creek Indians ceded a large tract of land, which included St. George Island, to trader John Forbes and Company, known as the 'Forbes Grant'. Bob Sike's Cut separates St. George and Little St. George Islands. It was cut to provide Apalachicola fishing fleets and other vessels access to the gulf from Apalachicola Bay. During the first half of the 1900s, the island's pine forest was turpentined. St. George was also the location for numerous training exercises by troops from bases located on the adjacent mainland during World War II.

Neighboring Little St. George Island, located just west of St. George Island, has a colorful history full of lighthouses. The first lighthouse on Cape St. George was built in 1833 and remained until the 65-foot tall light was destroyed by storms in 1846. A second light, completed in 1848, was about 75 feet tall and made using materials from the 1833 lighthouse. It lasted three years, until it was flattened by a hurricane in August of 1851, which also destroyed the Cape San Blas and Dog Island lighthouses. The third and final light was completed in 1852. The third lighthouse stood for 153 years until hurricanes, wars, and erosion caused it to collapse on October 21, 2005.

In the spring of 2006, the St. George Lighthouse Association (established in 2004) worked with the State of Florida DEP and successfully salvaged the pieces of the fallen light. Volunteers cleaned the old mortar off more than 20,000 of the original bricks so that they could be reused in the reconstruction of the lighthouse. The original pieces of the iron lantern room, twisted in the fall, have been preserved as artifacts and used as patterns to reconstruct the graceful birdcage enclosure that once housed the third order Fresnel lens. Volunteers helped reassemble the lantern room, which was displayed in the county park until time for it to be hoisted to the top of the rebuilt lighthouse.

In 2007, the St. George Lighthouse Association received State Historic Preservation Grant funds which enabled the reconstruction of the tower to begin. The reconstructed lighthouse opened to the public on December 1, 2008. Additional state funds were appropriated for enhancements to the county park, renamed St. George Lighthouse Park, allowing for the planting of sabal palms and the installation of brick pathways. A temporary Visitor Center and Lighthouse Museum has been built, and will eventually be replaced with a permanent structure designed to replicate the original lighthouse keeper's dwelling.

Use of the beaches for recreation has been the major activity of recent island visitors, especially since the completion of the bridge in 1965. Dr. Julian G. Bruce St. George Island State Park now occupies 1,883 acres at the eastern end of the island. Other areas of the island on the bay side and all of Little St. George have also been purchased by the State of Florida, thereby ensuring preservation of their natural state.

Development on St. George Island has been orderly, and the beauty of the land has been well protected by low density zoning regulations. Strict building codes require minimum square footages, allow only one single family dwelling per lot, and limit height to 35 feet from the first habitable floor elevation (which means no high rises). Additional architectural controls in several areas, particularly St. George Plantation, ensure the integrity of the island.

There's a gentle magic about the island. Watching the gorgeous sunrises, sunsets, listening to the pounding of the surf, or watching the fog roll in, brings an inner peace that is all too rare for most of us. With approximately 1,000 permanent residents, St. George Island is never crowded, even during the peak summer season. Everyone can find something they enjoy - from swimming, sunbathing, and strolling the near primitive white sand beaches in search of seashells, to bird watching, throwing your cast net and fishing from the surf or your own boat.

You, your family, and friends will love St. George Island. Come soon and visit for a vacation or stay for a lifetime! 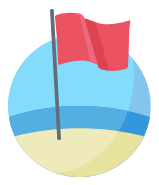 We want you to enjoy your beach vacation, but there's some precautions you must know about.